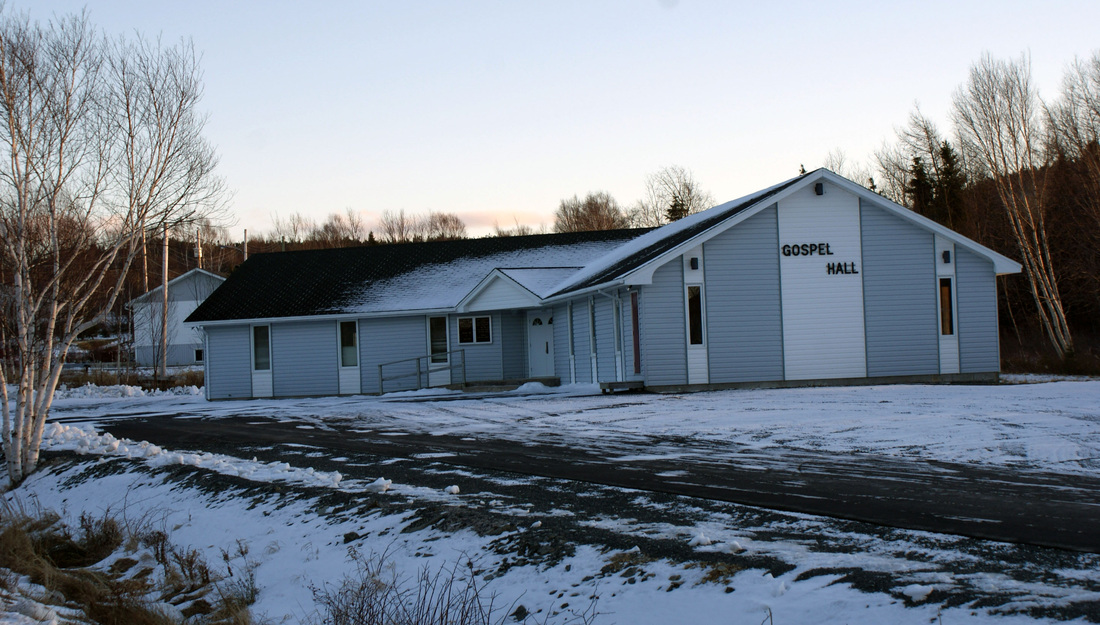 photo courtesy of Sandy Feltham
In 1976, two evangelists, Bert Joyce of  Corner Brook and Bryan Funston  from Richmond, BC. commenced gospel work in the  Eastport Peninsula
area. In the summer of 1976, a gospel tent was erected near Sandringham. There were large numbers of people that came to these meetings from  the Eastport Peninsula area and from Glovertown. After the tent meetings,  there was a portable hall brought in and set up on Mr. Bill Oldford's land  in Sandringham,and used as a temporary building for the preaching and teaching  of the scriptures. In 1977, a building was purchased in Sandy Cove, renovated and used as a Gospel Hall.
At that time there were members in the congregation  from Salvage, Eastport, Sandy Cove, Sandringham, Glovertown, and as far away as  Gambo and Gander. In 1981 the Gander members decided to start their own meeting  in Gander, and eventually they built a new Gospel Hall there.
In 1987, the  Gospel Hall members at Sandy Cove decided to build a new hall. Land was donated  in Sandringham by Johnny Mac Samson. This was a more central area and  where the work started in 1976. In 1988, construction on the new hall  began and was completed in the winter of 1989. The Gospel Hall is located on the corner of Main Road and Samson's Ave.
The regular weekly meetings of the Gospel  Hall are:
Sunday :  Breaking of Bread --9:30-10:30am
Sunday  School------11:00-11:30
Adult  Bible class----11:30-12:00
Gospel  Meeting-----7:00-8:00pm
Thursday:  Prayer and Bible Study---7:30pm